Why LED lights will change Africa 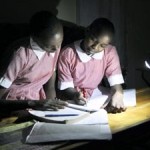 It has only been 20 years since Africa was introduced to the cellphone. In that time, millions of people have gained access to a communication tool that has changed lives and kept friends and families in touch in places that would never have been reached by land lines.

A similar kind of revolution is taking place in Africa – lighting. Light is key to the social fabric of most societies – allowing people to meet, socialise and work after dark. In so many villages across the continent, light is either provided by fires, paraffin lamps or candles. Electricity is a luxury for many – either not available or too expensive to connect and use.

If you’ve ever tried to read a book by candlelight or the flicker of a paraffin lamp, you’ll know that after a while, the low light level and the flicker will tire out your eyes. Yet millions of students study by candle light or paraffin lamps every day. Until now there just hasn’t been an alternative.

Enter a low energy consumption light source (LED lights), a mechanism to create power (solar cells) and a cheap way to store energy (rechargeable batteries).  While solar and battery technology has been around for some time, led lighting has only recently become viable with higher lumen outputs that make their performance acceptable. But that is not the only reason that change is about to accelerate. What will drive the change is the cost reductions in all three technologies.

In fact, with ever increasing oil prices trading off against technological breakthroughs and scale advantages of these new technologies, pricing is coming within range of “affordable”. A 2 watt solar cell with a battery and a series of small LED lights can light up a small house and now with improvements in quality and longevity, the upfront cost of purchase can be recovered very quickly. Thereafter, the lighting is effectively free and plentiful. All this thanks to the amazing low power consumption of led lights. With over 100 lumens per watt now becoming the standard, just 3 watts can light up a desk or a kitchen area with enough light to see and work by.

Besides the cost recovery angle, the quality of the led lights is far superior to the alternatives anyway, and so students can study with cool white light that does not stress the eyes.

An article by LED Lighting Solutions

LED lights and solar panels – impact on education in Africa

A World Bank assessment of lighting in Tanzania found that 37% of people (the largest single grouping in the study) wanted improved lighting for the impact it would make on the education of their children. They said that it would allow their children to do their homework at night.

This concept may be foreign to those in developed countries, but in Africa, candles and paraffin lamps are mostly used by children to do their homework. The flicker and poor light quality often leads to eyestrain and concentration problems with shorter study times being the result.

LED lights are low power consumers and are thus perfect for use with a small solar panel and rechargeable battery pack. Yet low quality led lights that fade very quickly (lumen depreciation) and sub-standard battery packs that do not last more than a few hundred cycles, are damaging the market. Poor people cannot afford to make mistakes on new technology and given the social dynamic of African communities, word of failure spreads fast.

We need to ensure that only good quality led lighting finds its way into the market, and we need to encourage it. Education is the key to development (and to buying good quality LED products), and until we recognise that and do everything needed to improve it, we will not see the growth in Africa that we all wish for. Promoting affordable and useful lighting technology is one way we can do this – and as LED lighting professionals we also need to educate the consumer about the technology to avoid damaging what has to be one of the most important technologies of the millenium.